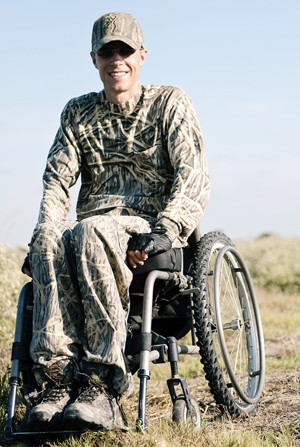 Growing up in a small town on the Texas gulf coast, I fell in love with the outdoors when I was nearly 12 years old when my dad took me duck hunting the first time. From that day on, I knew it would be a part of my life forever.

When I was paralyzed at 17 during the summer of 1986 after diving into a pool, it was the one thing I knew I could never give up. Three months later, I was back in the woods with my dad learning how to hunt again.

It wasn’t long after my accident that I began writing for my website anytime I had a successful hunt or stumbled across an interesting story. That was the beginning of my outdoor writing career. Since then, I’ve been published in mainstream magazines like Rack Magazine, King’s Hunting Illustrated, Eastman’s Hunting Journal, Horizontal Bowhunter Magazine, UFFDA magazine, Turkey & Turkey Hunting magazine, the African Hunting Gazette and Universal Hunter.

All the while, I’ve been going afield wing-shooting and big game hunting across the United States and on three different continents, so far. I started writing as a way to chronicle some of my trips and provide an information source for anyone who might be looking to get back into the outdoors the way I did.