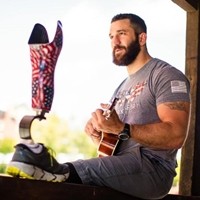 About: CBS Sports Inaugural 2015 Triumph Games Champion Redmond Ramos has never let his injury slow him down and shows the world that we all can Succeed through our Struggle. After losing his leg stepping on an IED in Afghanistan, Redmond Ramos decided to dedicate his life to helping others. The day he left the military he started his acting career by reenacting his injury everyday in the name of combat trauma medicine. Redmond loved spending everyday playing the part of a Marine, Police officer, or even Afghan/ American Civilians during face to face live action drills with crowds of up to 200. Now Redmond is an actor, started a successful Motivational Speaking Company, and is actively involved in competing in adaptive sports.

Redmond is very recognizable for his tattoo which reads "I'm with Stumpy" and points to his missing leg. He is known to most of the world as "DocPegLegRed"; a name he cherishes deeply as it eliminates the negative stigma associated with injury. Ramos deployed to Afghanistan as a combat replacement for 3rd Battalion, 5th Marines as a Navy Corpsman. While in Afghanistan, Ramos was rushing to assist an injured Marine when he stepped on an IED, losing his left leg. He won his Warrior Games medals just 11 months after his injury. Ramos has been involved in public speaking since 2008. While in the military, he was always striving to teach his junior Corpsmen (field medics) and Marines combat trauma management. Ramos was in charge of training the Japanese Self Defense Force (JSDF) in combat medicine during Exercise Forest Light 2010 in Sekiyama, Japan. The day Ramos left the military, he began teaching tactical combat medicine as a civilian contractor for the military. He then found happiness in speaking for the Elizabeth Hospice Center. Being able to thank WWII veterans and their families for their service was an experience like no other. A year later, he was speaking for the hospice center by day and teaching tactical medicine by night.