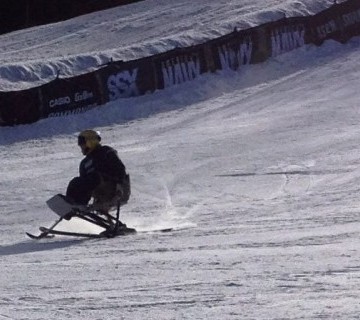 Kevin grew up in New Jersey and began skiing recreationally in Pennsylvania’s Poconos at age 11. By 1994, he was a serious snowboarder and occasional skier living in the Lake Tahoe area when he became paralyzed in a snowboarding accident.

With a heralded career of wins in adaptive skiing, Bramble has made a reputation for himself not only as a racer but also as a freeskier. One of the first people to take a monoski into terrain parks, half pipes, and extreme terrain, Bramble and teammate Monte Meier are featured in Warren Miller’s 2006 ski movie “Off the Grid”.

After several years skiing in a monoski he had purchased, Bramble decided to design and build his own. He began hand-building monoskis for friends and teammates, and Kevin Bramble Goodz (KBG) was born.